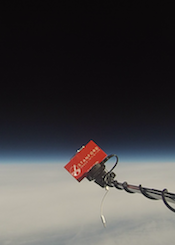 A photo of the edge of space, taken by SSI-23, Gemini

The Balloon team constructs and launches high altitude Zero Pressure Balloons (ZPBs) with experimental payloads. To date, the team has launched and recovered nearly 100 high altitude balloons to as high as 120,000 feet with thermal controls, satellite communication, and scientific payloads. They have launched a balloon all the way across the Atlantic Ocean from California, and are currently working to enable balloons to fly even further. The Balloons Team Faculty Advisor is Dr. John Pauly.

Balloon payloads are launched with state-of-the-art equipment constantly re-envisioned by the team. Recent additions include altitude control mechanics for ZPBs, including a gas venting valve and ballast dispenser, as well as a custom flight control system, two-way satellite communications, an intelligent altitude control algorithm, autonomous guided payload recovery and more. The goal of the team is to push the bounds on its current High Altitude Balloon (HAB) flight hardware, both in terms of flight time and flight distance.

The current team co-leads are

The core of the Balloons team is a set of long-term technical projects. Current projects include:
Cycloon, which aims to harness altitude control technology and the unique advantages of a balloon platform to study tropical cyclogenesis.
HABSIM, a GEFS-based trajectory prediction server and an associated Python package enabling predictions and optimizations on custom profiles.
Spaceshot, which aims to launch a rocket off a high-altitude balloon to reach space.
HABMC, the balloons team mission-control software, a powerful web-app that provides real-time data, analytics, and controls of balloon flights.
Balloonerang, which aims to build a payload which autonomously glides to a predetermined recovery site.


The balloons team is committed to openness and diversity in projects; project teams serve to facilitate member interests and novel new ideas and propositions; talk to the balloon co-leads or the relevant project leads if you have an awesome idea you'd like to try out!