Project X is a 2015-2016 Balloons team project targeted towards the creation, development, and refinement of sensor payloads for high-altitude balloons. The current focus of Project X is the collection of data regarding atmospheric quality and composition.

Project X has had success testing and incorporating the following sensors (pictured at left) into HAB payloads in conjunction with an Arduino Uno unit:

Project X is also in possession of the following sensors, but has yet to test or incorporate them into a HAB payload: 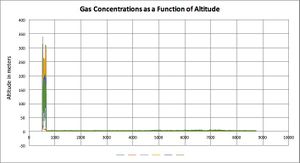 Project X launched an experimental payload along with Project UV as part of the SSI-28 launch.

In order to resolve this issue for the next launch, Project X plans to incorporate operational amplifiers into the sensors' circuitry. These circuit components will amplify the signal output by each sensor, pushing detection into a more readily analyzable order of magnitude.

Project X is prepared to launch a revised atmospheric analysis payload as part of the SSI-30 launch.

In the upcoming months, Project X hopes to obtain a greater body of information regarding atmospheric quality and composition.