SSI-19 was the 19th launch of SSI Balloons. SSI-19 flew for just over 15 hours and to an altitude of 119,932 ft - breaking SSI's altitude record. The launch was a demonstration of the physical feedback found at high altitude with a precision filled latex balloon. The payload maintained an altitude of approximately 118,000 feet merely by passive feedback and no active control - it was degraded by UV radiation and descended shortly after sunrise. SSI-19 landed in Yosemite just east of Grant Lake after a flight of 15 hours.

SSI-19 was based on a flight method that was first successfully flown by the California Near Space Project (CNSP). The principle of the launch is inflating a large latex balloon (In the case of SSI-19, a 1600g) to a very low lift capacity (365g payload, ~140g free lift) to launch a very light payload. By barely filling the balloon and providing a very light payload, the balloon is able to ascend to a very high altitude (110,000-120,000 ft) where there is a positive feedback loop, allowing the balloon to equilibrate due to natural phenomena (no active control mechanism). 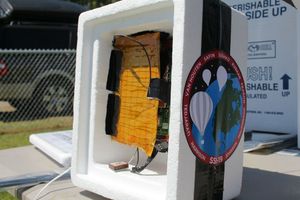 The SSI-19 payload was, as needed, a very barebones set of electronics. It included an APRS BigRedBee transmitter using the callsign of balloons team member Iskender Kushan (KK6MIR), a GPS for position reporting, a sizable lithium-ion battery, and a heater made of nickel-chromium (nichrome) wire. In total, the payload had a mass of about 365g. It was the first balloon to be launched during the launch of SSI-19, SSI-20, and SSI-21. CNSP graciously brought their mass-flow meter to fill the SSI-19 latex balloon to a precise lift capacity (a mission-critical aspect of this launch).

The launch was conducted at Laird Park, just west of Modesto, CA, a site frequented by the balloons team. The team left campus at 10 am, arriving just after 11:30 am. The payload was essentially flight-ready, requiring only minor pre-flight additions and verification of system fidelity. The APRS transmitter was verified for flight-readiness by ensuring transmission on the ground, the payload was sealed, and just prior to launch, the heater was hard-wired to the battery pack (for constant heating).

Filling of the 1600g Hwoyee balloon began at around 5:30 pm. Filling was coordinated in conjunction with CNSP personnel, who used their mass-flow meter to fill the balloon with the appropriate volume of Helium as calculated and verified by SSI members. Filling was challenging due to higher than expected ground wind speeds. After filling, launching was additionally challenging due to powerful east-bound winds, which pushed the balloon nearly into the ground on multiple occasions. During a moment of south-bound winds, the balloon was released from the north end of Laird Park (in order to clear the southern tree line) and ascended at a nominal velocity. 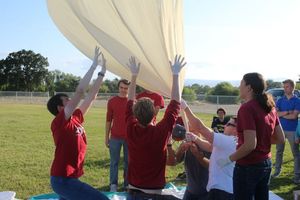 As expected, the balloon had a fairly slow ascent velocity due to its low free lift. It ascended at an average velocity of around 1.5 m/s, initially with a southbound heading until hitting north-bound winds 10 minutes into flight. Following ascent to approximately 10,000 feet at 7:07 PM PDT, SSI-19 had a East-Northeast heading for the majority of its flight. It reached critical altitude at around 8:00 AM PDT on May 17th, just south of Mono Lake in the Yosemite National Park. As the sun rose, the balloon began being degraded by UV radiation.

The balloon reached a peak altitude of 119,932 ft at 9:15 AM PDT, May 17th, breaking the former SSI altitude records for latex balloons. It burst shortly after this position report, indicating a descent of nearly 1,000 feet. Unequipped with a parachute, SSI-19 descended from altitude in a matter of approximately 30 minutes. It landed just east of Grant Lake, a few hundred feet off the California 395. 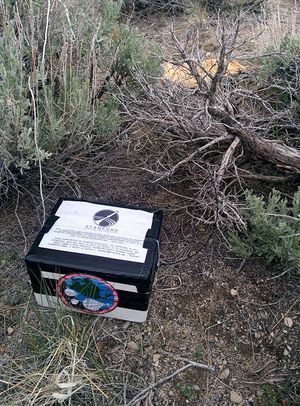 SSI-19 at the Recovery Site

The ability to use natural passive feedback to equilibrate at a given altitude was spectacular to observe. Nonetheless, issues existed.