SSI-44 was constructed and launched over the course of two weeks as an introductory onboarding launch for team Zeus, also known as "The SSEA Team" for the overwhelming number of members who were also participants in the Stanford Summer Engineering Academy. The launch was successful, as was the recovery, and it was SSI's first post-sunset recovery. 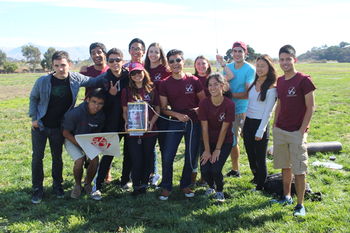 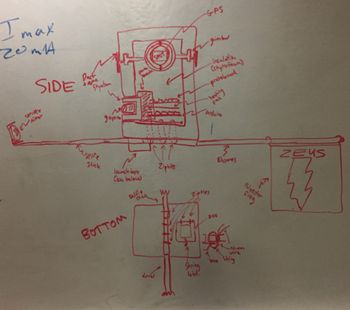 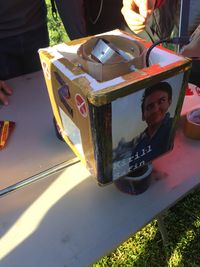 The Payload Immediately Prior to Launch

The payload consisted on one box made of two vertically conjoined boxes. Secured to the bottom with zip-ties was a selfie stick holding a convex mirror out in front of the GoPro (embedded in the side), and balanced with dope-ass Zeus flag. The box itself was adorned with Kirill's, Aria's, and Brandon's faces, along with SSI stickers, the American flag, and gold and space duct tape. A plastic bin on the bottom was filled with slips of paper with Kirill's face, name, and number, then secured with a string designed to be cut with a Nichrome wire at a designated altitude. A keychain camera wrapped in hand warmers and duct tape was secured to the base of payload to get a birds-eye view of the Earth. 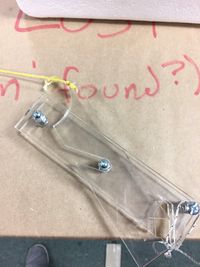 Although team Zeus endeavored valiantly the previous night to get everything working so the payload would be ready to launch upon arrival, some inevitable difficulties arose. First, the SPOT wouldn't connect to the satellites. Once that was resolved, the GPS connected to the Arduino wouldn't connect. Its signal was most likely blocked by the metal ring of the gimbal. The connection issue was resolved by removing the gimbal, allowing the GPS to get a lock, then replacing it. During initial testing, the Nichrome wire accidentally turned on, severing the string holding the plastic box on the bottom in place, releasing the papers with Kirill's contact information. The error in the code was resolved and the wire was reset. During the sealing of the payload, the thermocouple was inadvertently encased in duct tape, producing anomalous external temperature data. Additionally, the GoPro was set to picture mode, so it took one picture every second instead of recording video :/ At first, it seemed that the loop on top of the parachute was too big, as it got caught on the release mechanism. This was fixed with a zip-tie very rapidly before launch. The balloon was released at around noon after securing the payload to the balloon with a very extensive, very sketch knot. All knots were duct taped over many times.

The balloon traveled from its origin at 2093 San Juan Drive, Hollister, CA, approximately north-east. It was airborne for about 2 hours and traversed __ miles during that time. Eventually, it landed north of Modesto, near Yosemite in LaGrange, California. The final resting place happened to be 2.5 miles off the main road on a cattle ranch. This would prove to be a difficulty. 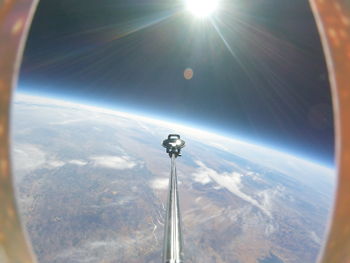 After the other two teams' relatively easy recoveries, team Zeus moved onward to pick up their payload. When they approached the area where it had landed, they found themselves at a very ominous gate, locked and rife with ominous signs, a tire, and bullet holes. They debated trespassing, then decided to go for it, but a man pulled up in a truck. 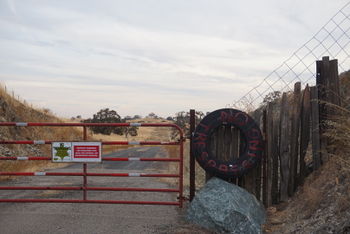 The group split and only Theo's and Kirill's cars stayed behind at the gate. The recovery team included: Kirill, David, Celeste, Paulina, Ella, Marco, Hannah, Ryan, Jesus, Paige, and Phillip. At this point as they hopped the gate, the sun was very close to setting, so they jogged. The dirt road continued for about half a mile, then came to a pasture and a gate and hopped that too. After a mile, the faint trail through the weeds ended, and the team walked through the weeds to a barbed wire fence with cows on the other side. They avoided the cows by going up and over a hill, then found the trail on the other side, which lead to the payload about a mile down the path.

As the balloon and balloon hook were absent, it was clear that the parachute release mechanism successfully deployed, releasing both the parachute and the balloon. At some point, the key chain camera snapped off and was unfortunately lost. During the ascent, as evidenced by the GoPro images, the mirror had been turned upside down out of view of the camera. After that point, the payload itself was no longer visible in the GoPro images. Upon recovery, the GoPro still had battery power, but SD card was full. Additionally, the string holding up the plastic box was still intact, since the nichrome wire failed to cut due to a software bug. Team Zeus carried it back down the path, attempting to brave the cows, but upon encountering them and their glowing eyes, they backed away and ran over a hill. On the way back, Kirill kicked a toad :( Eventually, the team made it back to the car an hour after recovery, then drove back to Stanford after a brief stop in the Modesto In-and-Out to take revenge on the cows and to consume their delicious flesh.