SSI-86 (project designation CY-2; also called BalBal) was the second launch of Project Cycloon on May 18, 2019. It featured a legacy ballast mechanism from ValBal operated by Cycloon avionics and thus marked the beginning of

#cy-flops , or Cycloon flight operations. The mission was noted for its low-altitude profile, interaction with inclement weather, pentagram traced out by RockBlock coordinates, and most remarkably, resumption of flight a full 24 hours after presumed flight termination, the only such occurrence in SSI history.

After the lessons learned of CY-1, a plan for the remainder of the year was decided upon on April 21. First, due to the avionics issues of CY-1, it was envisioned that a marine tether profile launch would be reattempted in early May. Because it was decided that a grounded tether would be a more suitable means of testing endurance, the requirement on launch windows became much less stringent. Then, on May 11, there was to be a HF communications test module as a payload on a ValBal. Finally, on June 1 there would be a fully altitude-controlled flight using the ValBal ballast mechanism, Apex Vent, and Cycloon avionics.

Data from CY-1 had demonstrated that the floating coefficient of the system was very low and therefore the aerodynamic drag on the balloon very large; it was suspected that high aerodynamic forces during winds led to the termination of that mission. Therefore, the first priority was to design a more effective and hydrodynamic floater. This was done by April 25. On April 28, however, the would-be second launch was cancelled due the ValBal controversy, and the would-be first launch was delayed to mid-May. Furthermore, due to continued delays in the HF transceiver parts supply chain and the overall lack of urgency, the communications test was delayed indefinitely. The mid-May launch would instead aim to test the full extent of the system in the absence of a venting mechanism --- that is, marine tether and ballast mechanism --- by starting as a marine tether, dropping ballast, popping, and landing on land, a so-called float-drop-pop profile.

On May 9, such a float-drop-pop launch window was identified for May 19, 2019, from Santa Cruz, and it was decided to move forward with the launch. By May 12, however, this plan was vetoed due to safety considerations and the lack of a suitable, rural launch site outside the city limits of Santa Cruz. Instead, the launch was planned to be from Hollister (save for a brief consideration of Los Vaqueros Reservoir, which would have preserved the possibility of a float-drop-pop profile), and it would solely test the ballast mechanism under the control of Cycloon avionics. In order to optimize endurance despite a lack of vent mechanism, it was desired to have a launch as late as possible, with an ascent rate as low as possible. Due to forecast rains on May 19, the launch date was moved to the afternoon/early evening of May 18, 2019. Over the course of the week, the predicted arrival of rains became earlier, and the launch time was gradually moved to the morning.

Control of the ballast mechanism and two-way communications of RockBlock were established on May 15 and 16, respectively, and the 3D-printing of mechanical parts and system integration occurred on May 17. Despite the morning launch time, it was hoped to suppress the ascent rate to less 1 m/s, such that the mission would survive sunset and descent overnight. Ballast would then be dropped to equilibrate at a low altitude, and the mission would terminate only after rising and popping the following day --- an trajectory of 18 hours which would lead well into Nevada.

Power: 18 L91 lithium AA batteries. In comparison with the standard ValBal complement of 12 L92 batteries, this was thought to be more than sufficient under the most optimistic conditions.

Mass budget: 3.42 kg. Counterweight was designed to balance 3.1 kg of total lift, after which ballast would be removed. In actuality, target fill resulted in nearly perfect buoyancy and no significant ballast was removed. 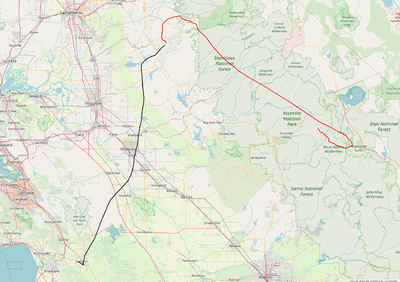 May 18 0935 PDT: Balloon released after being adjusted to a barely perceptible ascent rate. The mass of some 5m of tether was sufficient to cancel net lift, and an upward thrust was necessary at release time. Initial motion was very slowly to the southeast.

May 18 0936 PDT: Ballast command was sent to avoid the hills southeast of Brigantino park (in retrospect, this was not necessary).

May 18 1007 PDT: By this time, the ascent rate had averaged no more than 0.1 m/s, and concerns were raised that the trajectory would not clear the Diablo Range to the southeast of Hollister, which had peak elevations in excess of 1000m. It was reasoned that since the trajectory followed the San Benito River valley, there would be ample time to clear the range. However, to be safe, and in response to a further loss of altitude at 260m, a further ballast command was sent.

May 18 1013 PDT: Trajectory turned northeastward over south Hollister at an altitude of approximately 500m. This was alarming as it meant the balloon would approach the mountains more quickly. However, as the ascent rate had risen above 0.5 m/s, no further action was taken.

May 18 1100 PDT: After nearly an hour of steady ascent at 0.6 m/s, balloon cleared the Diablo Range at an altitude of 2.5 km. As it had done so by means of Pacheco Pass, the maximum ground elevation did not exceed 700m. Concerns were therefore raised that the most recent ballast event was unnecessary, as 0.6 m/s risked popping before sunset. It was hoped that the recent steady ascent was due to the air mass ascending the slope of the Diablo Range.

May 18 1128 PDT: Despite passing over the descending slopes of the Diablo Range, steady ascent continued and even accelerated at one point to over 1.5 m/s.

May 18 1143 PDT: After slowing ascent, balloon reached maximum altitude at 4430m over (37.3780, -121.0420). Balloon then began to descend. While it was not clear at the time why ascent stopped, it is apparent in retrospect that the trajectory had entered areas of inclement weather, and downdrafts and/or rain were pushing/weighing the balloon downward.

May 18 1220 PDT: After two ballast events, the trajectory leveled off over (37.713, -120.908), reaching a minimum altitude of 1220 m, and then resumed ascent just above 0.5 m/s. This was viewed as having effectively delayed launch by 2 hours and therefore a net benefit for mission endurance.

May 18 1341 PDT: Balloon descended at over 2 m/s less than 2km above the ground, again likely due to downdrafts and/or rain, prompting a series of frantic ballast events. Due to the low altitude and rising ground elevation, the trajectory was within two communications intervals of flight termination. All hopes of a long-endurance flight had been abandoned; survival was the only priority.

May 18 1416 PDT: Descent slowed and balloon reached a minimum altitude of 351m, less than 80m above the ground elevation of 285m at (38.277, -120.799) just east of Pardee Reservoir in Calaveras County (due to hilly terrain, it is possible the balloon was even closer to the ground and maybe even made contact). Nevertheless, the trajectory was recovered and ascent resumed. A ballast command was sent to make sure ascent was steady enough to clear the rising Sierra Nevada foothills.

May 18 1446 PDT: After several consecutive intervals of ascent, sudden descent was observed at a rapid enough speed to terminate flight by the next communication. A ballast interval was sent --- too little, too late in retrospect.

May 18 1451 PDT: Balloon reported its final resting coordinates and elevation. After the next communication, flight termination was confirmed.

May 18 1608 PDT: Communications ceased, presumably due to rain. By now it had become clear that at least the last two hours of the flight had been in the midst of inclement weather.

May 18 1953 PDT: Communications resumed, with GPS and barometer reading nonsensical values. From this point forward, RockBlock coordinates were the only available information.

May 19 1530 PDT: Unbeknownst to anyone at the time, balloon resumed flight after over 24 hours on the ground, presumably due to solar heating and drying.

May 19 2110 PDT: Balloon appeared to land in Yosemite NP, in the vicinity of Vogelsang Peak and Bernice Lake, well above the tree and snow line. Due to noisy RockBlock coordinates, it is impossible to ascertain a precise location, nor to rule out further movement down the slopes overnight. It is also unknown if the balloon popped or experienced a thermal descent at sunset.

May 20 1952 PDT: Last RockBlock message received. It was not until the evening of May 23 that efforts were made to contact local individuals for recovery and the second flight was discovered. 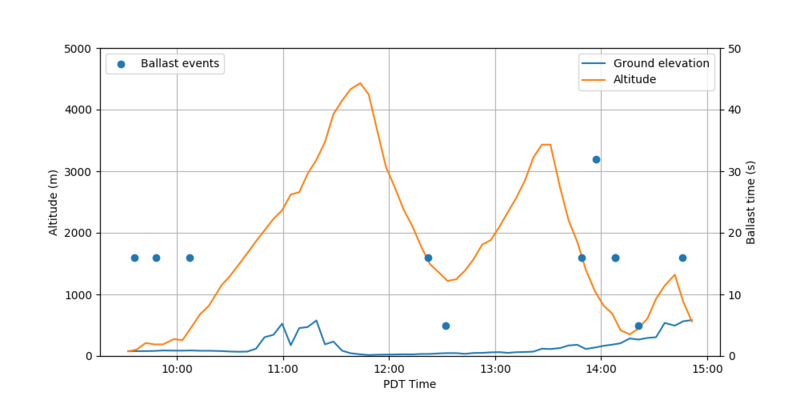