SSI-90 (project designation CY-4) was the fourth launch of Project Cycloon on July 27, 2019. Aiming to explore the advantages of polyethylene over latex for Cycloon's long-endurance missions, the launch successfully demonstrated SSI's first-ever in-house manufactured balloon envelope and also featured one of the lightest systems and payloads in SSI history.

The same day that CY-3 failed to reach the Pacific Ocean due to an unexpected flight termination at relatively low altitudes, Spaceshot's SSI-89, flying a Raven 54k cubic foot polyethylene ZPB, experienced increased flight endurance thanks to equipment failure, surviving into the Pacific Ocean and floating on its surface for two days despite a conscious objective to avoid doing so. It was remarked by many that Spaceshot had achieved Cycloon's mission profile more successfully than Cycloon. This was almost entirely attributable to the characteristics of Spaceshot's polyethylene envelope --- unlike a latex envelope, it was capable of passive venting and equilibration, was impossible to pop, and was significantly more water-resistant. Upon reflection, it became clear that the only reason Cycloon had defaulted to latex was that no low-cost polyethylene envelopes could be purchased at a size suitable for Cycloon-type missions. However, thanks to the obvious low cost of the raw materials and relative simplicity of manufacture, an initiative was launched to look into manufacturing polyethylene in house. As an additional benefit, active venting would be highly simplified in a zero-pressure envelope, as an apex vent could be mechanically identical to a latex bottom vent.

On June 6, 2019, summer goals were formally codified. It was determined that writing an altitude control algorithm, improving simulations, manufacture of a platform PCB, manufacturing polyethylene envelopes, and mass producing ballast and vent mechanisms were the top priorities. After a summer recess, work began in earnest following a meeting on July 9. A launch schedule was set, featuring a test launch of an in-house manufactured ZPB on July 21, 2019, and an altitude-controlled ZPB on August 18, 2019, with other goals and deadlines left unspecified.

Significant work was done on simulations in preparation for the eventual need for trajectory search and optimization, forcing the launch to be delayed to July 21, 2019, but efforts quickly turned to the ZPB. Raw materials, namely 0.3 mil painter's plastic, a slab of acrylic, a 500 W strip heater, and a current regulator were purchased. On July 17, the heating assembly was assembled, and on July 20 mechanisms of polyethylene sealing were explored. After discovering an effective routine, a single 22 ft length, half-width (6 ft) polyethylene envelope was constructed that day. A length of a 1 inch PVC tube was affixed to the bottom of the envelope as a fill tube and payload anchor point.

The recovered avionics from CY-3 were detached from the mechanical assembly and the motor control components removed. Final integration occurred on July 23, and no further avionics work was required. Due to a miscalculation, it was thought at launchtime that the equilibrium altitude would be around 24 km, making a trajectory into the Pacific Ocean highly likely.

Avionics: CY-3 avionics: BMP 280, TinyGPS, Teensy 3.2 transmitting at adjustable intervals over Rockblock. At the last minute, it was decided to not include a SPOT Trace. Although communications were perfect leading up to the launch, no transmissions were received after launch. 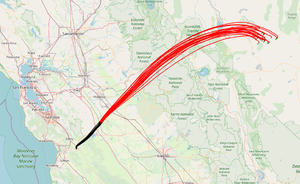 Simulated trajectories based on expected parameters 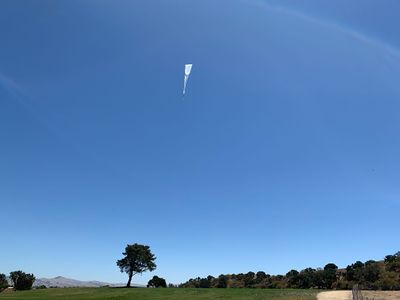 July 27, 2019, 1246 PDT: Balloon release with an estimate ascent rate of 2.5 m/s. Due to ground winds being stronger than expected, the orientation of the balloon was nearly sideways at the moment of release, and the payload suffered a hard impact with the ground and was dragged by the balloon for approximately one second before lifting off. In post-analysis, it was determined that this impact likely loosened connections already made vulnerable by the impact at the end of CY-3, in particular the connections to the RockBlock. No transmissions were received after launch.

It is expected that the balloon equilibrated at an altitude of 14-15 km and descended slowly (0.5 m/s) until flight termination.