The purpose of the launch vehicle is to reach an apogee of approximately 11,800 ft and completely separate into two sections. The motor section will consist of one set of 4 stability fins and will fall to the ground using a reefing system. The payload section will deploy a reefing system and will contain actuating canards to stabilize the payload's decent.

The forward airframe will be 40 in long and the aft airframe will be 45 in long, both with an inner diameter of 4 in and made of fiberglass. The total weight will be approximately 25.5 lbs loaded. We have selected to use the Intelli-Cone from Public Missiles and a CTI L395 motor with main deployment at 800 ft.

The objective of the payload for Prometheus is to achieve roll control using actuated fins that implement a PID control law. The main controller for the control law will be a Raspberry Pi B+ that interfaces with a Teensy 3.2 (Arduino-based microcontroller) to actuate a servo geared to two fins. The success of our mission will be demonstrated through a comparison of video feed with and without a control law.

Mission Statement
The goal of Prometheus is to demonstrate full roll control of a payload as it descends using actuated fins and a PID controller. 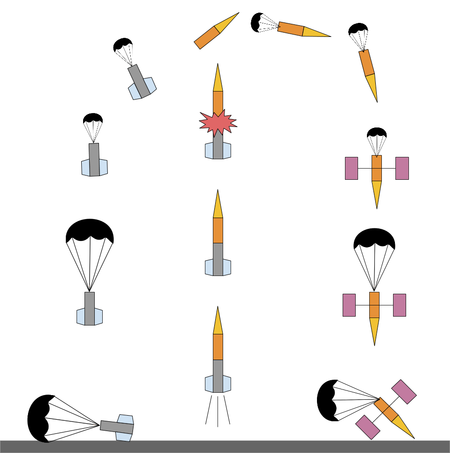 The rocket is comprised of two sections, the payload and the booster. The two sections completely separate with no shock cord running between them at apogee, allowing the payload to be tested independently with the PID controller while the booster is recovered as normal. The separation for Prometheus is unconventional in both its need for complete airframe separation and its use of cable cutters for a reefing system. The reefing allows us to implement a single tube dual deployment, which is necessary since the payload section must remain as one continuous piece in order to actuate the fins during decent. The addition of canards on the forward half of the rocket effectively push the CP forward such that we can attain a desired stability margin without the need for much additional weight. Our primary material of choice for our airframes and fins is fiberglass, due to its thermal and structural benefits.

The unloaded mass of the system is 12.9 lbs and 25.5 lbs loaded, using a Cesaroni Pro75 L395. The center of gravity is at 52.19”, and the center of pressure is at 61.45”, giving us a stability of 2.55 cal. Both the forward and aft airframes contain an avionics bay with dual altimeters that will control the separation and reefing charges, executed by redundant cable cutters. The forward airframe will additionally contain the avionics necessary for the PID controller including a Raspberry Pi B+, a Teensy 3.2, redundant 9-DOF Absolute Orientation Sensors from Adafruit, a Big Red Bee GPS Radio, servos to control the fins, and several cameras. The aft airframe will contain an additional GPS radio using a different frequency to ensure recovery of the booster section.

The unloaded mass of the system is 12.9 lbs and 25.5 lbs loaded, using a Cesaroni Pro75 L395. The center of gravity is at 52.19”, and the center of pressure is at 61.45”, giving us a stability of 2.55 cal. Both the forward and aft airframes contain an avionics bay with dual altimeters that will control the separation and reefing charges, executed by redundant cable cutters. The forward airframe will additionally contain the avionics necessary for the PID controller including a Raspberry Pi B+, a Teensy 3.2, redundant 9-DOF Absolute Orientation Sensors from Adafruit, a Big Red Bee GPS Radio, servos to control the fins, and several cameras. The aft airframe will contain an additional GPS radio using a different frequency to ensure recovery of the booster section. 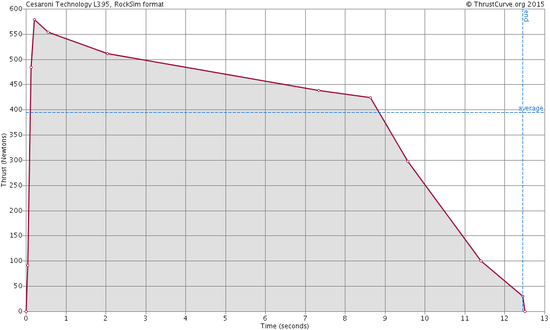 The nosecone of choice is the 3.9" Intelli-Cone from Public Missiles. The reason for this choice is that this nosecone is designed to hold an avionics bay inside of it and to be permanently fixed to an airframe, which is precisely the set up we will be utilizing since our payload section will not separate between the nosecone and airframe. This allows us the advantage of using the space inside the nosecone to hold avionics and save space inside the airframe for the fins, motors, and other necessary hardware. We will coat the nose cone in high heat primer (often used for car engines) and high heat paint, rated to withstand up to .

We currently estimate the fins to be 4” x 4” x 3/32” squares constructed out of fiberglass. As we develop a more realistic model for our system for our control law after we receive orientation data from a test flight, we will be able to more accurately determine how large of an area our fins will need to cover to exert the necessary torque to resist rotation. The fins will be connected on a worm gear mechanism, in order to prevent movement on accent, consequently protecting the fins from any kind of unintentional actuation.

Using OpenRocket, our CP is located at and our CG is located at with a stability of . This is considered an overstable rocket, however, it is necessary for us to be overstable on launch since the CP will shift forward during the flight and especially as we approach and reach supersonic speeds. After burnout, we will have a stability around 2 cal.

The payload and the booster sections will each contain two altimeters for redundancy (four altimeters total). Each altimeter will be wired up to the ejection charges mounted on the respective avionics bays as well as to a cable cutter for our reefing system. Since both the payload and booster section will be reefed, there will be redundant cable cutters for both parachutes as well (four cable cutters total). The reefing system will be discussed in detail in Recovery.

APRS is used as a live downlink between the rocket GPS and a ground station, in order to facilitate live tracking and recovery.

Our recovery system is somewhat unconventional, and we recognize this is a critical component to the success of our mission. As such, we will conduct extensive testing on the ground and using L1 and L2 vehicles to minimize any chances of failure.
The separation charges are staggered to ensure proper timing for the two parachute ejections. Additionally, we had to ensure that the aft parachute does not enter the forward airframe when ejected. To this end, we sealed the coupler on the aft end with a bulkhead and attached a fixed inner tube to hold the forward parachute. When the aft ejection charge fires, the aft parachute is pushed forward into the bulkhead which pushes the coupler forward as well. However, since there is a fixed inner tube, the coupler will only be able to move forward enough so that the aft airframe can detach completely and the parachute be ejected out of the airframe.
Once the aft airframe has separated, the forward ejection charge will fire, ejecting the forward parachute and the coupler. The bulkhead on the forward end of the coupler ensures that when the forward parachute is ejected, it pushes the coupler out and does not lodge itself into the coupler. The coupler will freefall back to the ground while the two parachutes are attached to the avionics bays using nylon webbing shock cords with Kevlar cord protectors.

Our vehicle requires us to implement two instances of a single-tube dual-deployment due to the fact that the vehicle will completely separate into two sections which cannot be separated again for two parachutes to be ejected. Several options were considered including using deployment bags, tethering, parachute cannons, and cable cutters. Each option had its strengths and weaknesses, but we ultimately decided to choose cable cutters due to their easy of use and increased reliability over other methods that would rely on a main chute unraveling correctly in the wind.

A PID control law system will be implemented in order to control the spin of the rocket along the Z-axis as it descends.

The actuation of the fins will be determined by a proportional–integral–derivative controller algorithm that utilizes derivatives to smoothly reach a target output value and integrals to correct the error buildup over time. This allows us to accurately change the output of our system based on the sensed Z-axis value at a given time during descent.

We can measure the success of our mission based on the data we can review after the flight, in addition to the video feed from our cameras. Our main camera will be a GoPro Session 4 mounted such that it will view the fins and the ground as the payload decends. We will compare the video data to our test flight that will not feature any controls implementation to verify our design is able to demonstrate roll control.

The main controller for our payload will be a Teensy 3.2 from PJRC. This micro controller not only is compatible with Arduino code and the Arduino IDE, but contains a host of additional features including an ARM processor, 2 I2C channels, and capabilities to connect to a CAN bus.

See this document for our research.

Kalman filtering and sensor fusion will be used to get accurate and fault-tolerant values for orientation, position and velocity.

Testing will occur in stages, starting with ground tests for critical components such as the cable cutters and airframe separation. We expect 2-3 test launches before integrating all components for our L3 launch. The first launch will be based on a Firestorm kit with the objective of reaching supersonic speeds to gather data about temperature, material strengths, and sensor capabilities at high speeds. Our second launch will feature the full 4" airframe with basic avionics and recovery systmes with the object of testing all the critical flight components. Prior to this launch will be extensive ground tests for the reefing system. The third launch will be a first round of PID control testing with the intent of refining the control iteratively over several launches. Additionally we are seeking the use of a wind tunnel for further testing and data collection purposes.
The majority of our parts will be available off the shelf with the exception of our PID fins. We will have a full CAD model of our rocket to demonstrate proper dimensioning and parts integration. Some components such as the avionics bays will be manufactured on campus in the PRL.

Control law will be simulated with known physical variables in Matlab, Openrocket and possibly JSBSim (a flight dynamics model used in FlightGear and commercial applications), in order to gauge the ideal constants for algorithm and have a better idea of how it works under different conditions (e.g. wind, imperfect servos…).

All necessary precautions will be taken when handling combustible materials and chemical fumes, such as working in a location away from residential areas with ventilation, and protective gear.

The most critical components of our rocket that pose the highest liklihood of failure are the ejection charges and cable cutters. In order to minimize any chance of misfires or shorts that could cause the charges not to fire, we will extensively test the system on the ground and through test launches. The addition of redunant altimeters and cable cutters for both the forward and aft airframes further enforces our safety precautions and recognition of this as vital to the mission’s safety and success.

Ultimately Prometheus aims to not only demonstrate the technically challenging concept of controlling the roll of a payload decent, but to serve as a basis on which we can build up rocketry knowledge and the framework under which the SSI Rockets Team develops larger and more complex projects. Possible future extensions of Prometheus could include attempting to demonstrate full control on decent, full control on ascent, and guided flights.