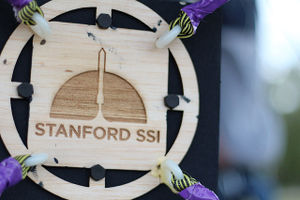 Project SPACE (Systematic Platform for Advanced Customization and Effiency) is the Balloons team project to create a modular payload for high altitude balloon launches. The goal is to create a payload with interchangeable panels and floors so that groups that want to put experiments at near space on one of the balloons can easily modify individual small parts and be ready to launch very quickly.

The current team leads are Brandon Vabre and Yuji Sugimoto. 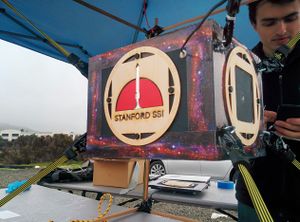 Kirill Safin had the initial idea to create a modular payload for balloons launches with the intent of being able to swap out components as needed on a by-mission basis. Having to re-make a new styrofoam container for each launch seemed unnecessary, as only minor changes were made between payloads. 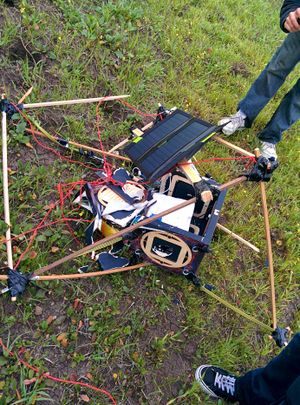 The unfortunate fate of SPACE Mk 1

The initial goals for the payload were simply two pronged: to be able to modularly adapt to payload requirements, and to be thermally insulative. Finding a material that would be insulative and easy to work with was non-trivial; in the end, it was decided to pursue the route of High Density Polyurethane Foam (HDPU). This foam was known to have a thermal conductivity rating just below styrofoam, and was fully machineable to boot.

The principal design featured four main components - a chamber, portals, blocks, and retainer plates. The chamber was the skeleton of the payload, essentially a rectangular box out of HDPU foam panels epoxied together. The most notable aspect was the rounded square holes on each wall of the payload -- these were called portals. A chamber had six portal of a pre-determined shape and size. The modular hot-swap blocks had the corresponding HDPU rounded-square panel. This HDPU block may or may not have been further machined depending on its purpose -- for example, a block meant to house a GoPro in one wall of the payload would also have a machined GoPro cavity and through-hole for the lens. However, other blocks, like the SSI logo block or note block did not require this kind of HDPU machining. The HDPU block was then epoxied to a wooden outer retention plate (initially bass wood). This outer retention plate had four 1/4" holes. When slotted into the appropriate chamber portal, the block was clamped to the payload using an internal retention plate and nylon bolts. All HDPU was also painted black for heat absorption. Further, eyebolts were attached in the four corners of opposite sides to allow fastening to a Tesseract.

SPACE Mk 1 flew on the first launch of 2015, housing SSI Gen 1 Avionics. It proved to be extremely thermally insulative (more than a styrofoam container) despite not being super air-tight, and allowed the modular swap of raspberry pi cameras, GoPros, logos, note blocks, and blank blocks. It's most profound drawback was its weight -- the total payload weighed in at around 2.5 kilograms. Unfortunately, SPACE Mk 1 flew on a balloon with a failed parachute deployment, resulting in a total loss of the enclosure. Luckily, it's destruction paved the way for a redesign. 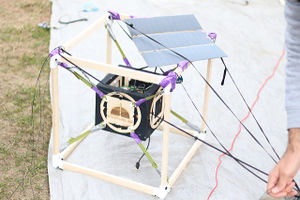 The SPACE Tesseract, colloquially referred to as the Rage Cage, is a light-weight modular exoskeleton developed for protecting the SPACE Payload. In the aftermath of the crash of SPACE Mk 1, it was deemed necessary and beneficial to enclose future payloads in a lightweight but robust frame, with elastic cords for shock absorption. The modular aspect of the SPACE Tesseract comes from it's use of 8 3D printed joints. Each joint acted as a corner of a cube, and had three plus-shaped extrusions for fitting of rectangular balsa wood beams. These beams, once inserted, would be fastened using a nylon bolt. The modularity came in the ability to change the size of the tesseract at any point by swapping different length balsa beams. Further, each corner joint had an interior hook to which elastic coords attached, which then were attached to the payload. 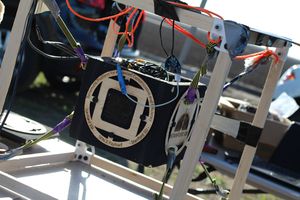 A renewed emphasis on weight reduction led to the creation of SPACE Mk 2 - SPACE Micro. This version of SPACE was dramatically smaller and less than half the weight. It utilized balsa wood instead of bass wood for weight reduction in paneling, and dramatically less HDPU. SPACE Micro was flown on seven SSI balloons, receiving tremendous usage by the team. It was ultimately abandoned for the lack of modularity needs at the given time. The creation of ValBal required a very specific thermal enclosure, with no modularity needs. SPACE Micro was not fundamentally different than SPACE Mk 1 -- merely smaller in size and lighter in weight.

The project was revamped in late 2015 along with its sister projects UV, Sol, Loon, and hab MC. 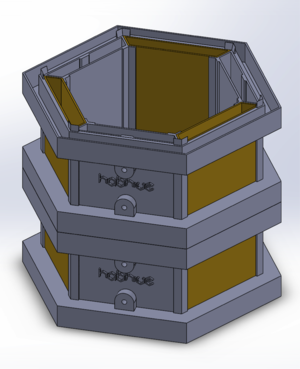 HAB HIVE (High Altitude Balloon, Hexagonal Integrated Vehicle for Experimentation) Iteration 1: In the initial design session it was decided to make a cube-sat like approach to the payload by having individual “cans” that would act like 1 U of a satellite. These cans would feature double walls that could sandwich aerogel in between in a thermos type idea in order to insulate the payload. Three of the walls would be able to be “Hot swap” panels (panels that can be taken out and interchanged) that can be modified for different experiments. The cans would be kept together by using bands that fit over the outside of the cans with an aerogel insert (similar to the cans themselves) that could be bolted in. These bands have a secondary use by insulating the area between the two cans that have no aerogel. It was also decided to use the new SSI 3D printer in order to make these due to having it readily accessible therefore giving us the ability to make rapid iterations. The shape of the cans was chosen to be hexagonal to maximize the circular build plate area of the 3D printer while still maintaining flat sides.

The first iteration of HAB HIVE was set to launch on SSI-28 as the payload that would house Project X and Project UV. Unfortunately due to 3D printer failure at multiple points during the last week of construction, the team was not able to deliver a product for the launch. We were still able to crash test our payloads by attaching what we had onto the bottom of SSI 28. The payload did survive landing.